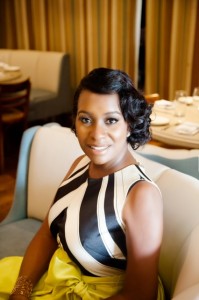 Erika Preval, Founder and Proprietor of Charm Etiquette, is the source for modern and approachable instruction in etiquette and leadership for youth and adults. Erika studied etiquette as a child and was presented to local society during her Debutante Cotillion. After her debut, she attended Spelman College in Atlanta, Georgia. While at Spelman, Erika made her second exchange trip to Japan, and upon return, worked for the Consulate General of Japan in Atlanta. This experience, coupled with working at top Wall Street firms and as Personal Shopper for Tiffany & Co are strongholds in her foundation of social skills.

However, the catalyst for Charm Etiquette was the complexity of sharing the manners she’d learned at the family table with her daughters who were always on the go. Restaurant servers were often complimentary of the girls’ behavior when dining out – a reflection of conduct learned at home. Despite the challenge of their busy schedules, Erika knew the importance of the girls having proficiency in social protocol and manners, and wanted to share those skills with others. She firmly believes that everyone deserves the lifelong leadership skills that fluency in the social graces impart and is dedicated to ensuring that they are acquired in a fun and memorable way.

Erika holds a degree in Economics and International Studies from Spelman College and Certification in Japanese Language and Culture from Nanzan University in Nagoya, Japan. She is a Certified Etiquette Consultant, as granted by the Etiquette and Leadership Institute – a division of The Protocol School of Washington and attended the prestigious Institut Villa Pierrefeu in Switzerland. She has served a contributing writer for Southern Living, and has been featured in Atlanta Magazine, among others. Her passion for community is evidenced by her philanthropy and  service in Board service with Girl Scouts of Greater Atlanta, membership with Atlanta Woman’s Club and the Junior League of London, and as a member of the Tocqueville Society and Board of Directors of the United Way of Greater Atlanta.

Erika resides in Atlanta and London with her husband, has two daughters continuing her legacy at Spelman, and looks forward to making your acquaintance.